So if you’ll allow me to be a little self-indulgent – this is my blog after all –  I want to write a little bit more about one of my favourite things, parkrun.
The Saturday just gone was my 200th officially recorded parkrun which means nearly four years worth of getting out of bed early on a Saturday morning and running round a park, usually Bushy Park. Actually I know I have run slightly more than 200 as I can vividly recall at least three occasions when I forgot my barcode – one time I was convinced it had fallen out of my pocket on the way round and ran the course backwards to try and find it, alas to no avail. Sadly, as quite rightly, parkrun these days have a ‘no barcode, no time’, I’ll have to just stick with the 200 for now.

My first parkrun was on 2nd January 2010. I must have loved it because I rushed back for a second visit on 13th March. 2nd January 2010 was run number 285 and I was just pipped to being first finisher by Olympian Andy Baddeley who finished in the ridiculous time of 14.14. Well I say pipped, I actually came in 18th that day, a finishing position I would love to able to achieve these days.  As an example of how much the numbers at Bushy have swelled, we had 471 runners that day, and the whole event was seemingly run by just eleven volunteers, numbers that would be unheard of today.  For those that aren’t regulars at Bushy Park, we regularly get over 1000 runners each week now. It’s a great introduction to the beauty of parkrun that a keen but not particularly talented runner such as myself can run on the same course as an Olympian such as Andy Baddeley. I’m pretty sure if you’re a Formula 1 fan they’d frown on that kind of thing if you tried to get on the back of the grid in your Ford Mondeo.  I initially wrote a version of this blog for the parkrun run report and at the time I wrote it I couldn’t really remember what it was that actually got me into parkrun but while out for a run earlier – in Bushy Park of course – I remembered what, or more specifically ‘who’, it was.
As a runner I’d been aware of parkrun but nothing more than that really but I hadn’t ever gone along as my running club usually ran on a Saturday morning and so I didn’t know anyone who went. But in late 2009 I had moved over to Twickenham and by the power of Facebook was back in touch with an old friend from Thorpe Park called Zoe. She was a regular runner over at Bushy and was regularly saying how great it was on Facebook so pretty sure one January morning fortified by New Year’s Resolutions I decided to give it a go. And after a bit of a hesitant start, I’ve never looked back.

Since that day I have run a further 179 times at Bushy Park and have run at other parkruns on 20 occasions.  Those other runs have been as far afield as Plymouth, Manchester and the Isle of Wight. The IoW run was particularly memorable as I decided to run back from the park to the holiday cottage we were staying in but managed to take a wrong turn somewhere so instead of a gentle extra 6 or 7 miles I managed to do a 17 mile run on a Saturday morning, without food or water. Which was nice.

In the early days my parkrun experience, like many others I’m sure, was turn up, run 5km, get my time recorded on a laptop(!) and then head home. I enjoyed it, it was useful to track my times each week and was great to have got a session in and be home by 10am but I can’t say it had any great influence on my life at first.  Again, like many people I’m sure, the first time I really ‘got ‘parkrun was when I volunteered for the first time.
I remember it being a pretty cold day and I seem to recall I was on scanning duty. Normally by 9.30 I would have been heading home so I never saw the later finishers come across the line and I was surprised to find myself moved by the efforts being put in by people coming across the line in 45 minutes, 50 minutes and beyond. In particular, though I remember being there as an hour ticked by and a lady called Sally came towards the finish line. It was her 100th run and despite it taking around an hour and it being pretty cold, there was a group of people there to cheer her in, pop champagne corks and celebrate with cake. I genuinely couldn’t believe that people would give up their time on a cold day to celebrate an achievement such as that – with so much more of a fanfare than anyone who’d finished in 14 or 15 minutes. I genuinely had tears in my eyes and I really do think it was at that moment that I started to truly get what parkrun is all about. I think I also got my first slice of parkrun cake that day which may have also had a positive influence on me coming back for more…
Since then I’ve volunteered quite a few times and have become a little bit of a parkrun evangelist in the intervening years. I absolutely believe that parkrun and similar movements are forces for good in this country and volunteering at parkrun has been one of the best things I’ve done – it’s up with sitting in the same chair as Kylie Minogue in a beachside café on Bondi Beach but that really is another story.
Over the last year I’ve tried to get a bit more involved and at Bushy I have tried out a few more volunteering roles and have even been lucky enough to have been Run Director a couple of times – forcing 1000 people to listen to me for three or four minutes before the off was definitely a highlight of the week for me. I’ve also got involved with a new junior parkrun over in Twickenham. Junior parkruns are 2km long and are for kids between 4 and 14. The emphasis is very much on fun and it’s been a real privilege to cheer, marshall and act as timekeeper at this event. Even through the muddy and cold winter months there have been at least thirty hardy children, 12 or so volunteers and plenty more parents out each Sunday ensuring enjoying themselves before 9.30 and earning their hot chocolate and sticky bun of choice in the café afterwards.

I was at an interview recently (still waiting to hear back, it’s hard to type with fingers crossed) and it was lovely to find out the interviewer was a fellow parkrunner and it was so good to have a relaxed five minute interlude in the interview when all we were really doing was talking about how great parkrun was, what runs we had done and how much fun it was to volunteer. It’s great to be able to build up a rapport with someone and as there are now 1,435,584 different people who have run at least one parkrun, the chances of meeting a fellow enthusiast is getting bigger all the time!

One of the most appealing aspects of parkrun is it can really mean different things to different people. Each week, parkrun HQ send out a newsletter which includes tales from around the country and I have never failed to have been moved by the stories of people who have used parkrun as a recovery from illness, a light at the end of the dark tunnel that can be depression or a way to unite a family on a Sunday morning. Even if running is not your thing, signing up to parkrun and registering for the newsletter would definitely brighten up your Thursday. One of my favourite parkruns was definitely when I ran with my nephew for the first time. At around 45 minutes it was definitely the slowest I have ever run but was an absolutely magical experience for me, I was very proud of Ben for making it the whole way round, and only stopping the once… or possibly twice. The brilliant online reporting and stats provided by parkrun also means I can keep a wary out on my niece who lives 200 miles away but is a regular at Plym Valley parkrun in Plymouth. Already a proud owner of her 10 t-shirt, her times are rapidly improving and it really is only a matter of time before she starts to finish ‘virtually’ ahead of me – which might mean I will have to forget my trainers next time I drive down the A303, but at least I can volunteer and cheer Kate on to a new PB instead! 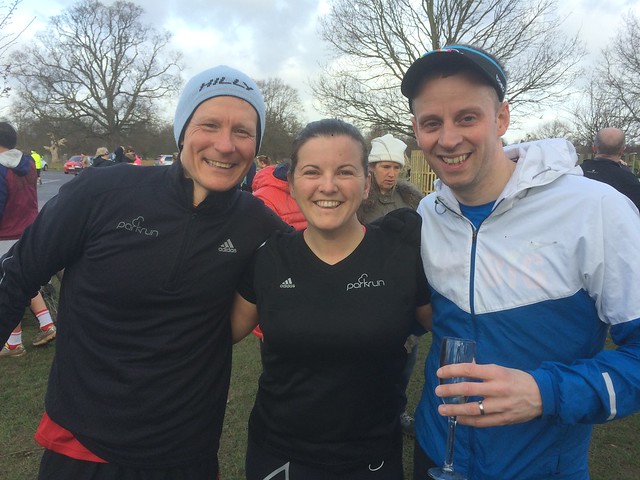 Going back to my 200th run I was also privileged to share my 200th run with two people central to Bushy parkrun and its continued success. Husband and wife running superstars Andy & Emma Wingate also ran their 200th parkrun on Saturday which is either an amazing co-incidence or a result of some very impressive planning.  I remember talking to a friend a few years ago about how hard it is to make new friends once you’re over the age of 35. I’m not saying I need new ones, the ones I have by and large lovely, but many of them have kids now and as time goes by, they naturally gravitate to other people who have kids. Probably because they’re secretly downing the Pinot Noir together while getting through another birthday party at the local soft play centre. As someone without children I think it’s especially hard to make new friends but parkrun has given me an opportunity to meet a whole bunch of new people who don’t think it’s bizarre to turn up in a park at 9am on a Saturday morning dressed in lycra, run a little bit and then catch up over prosecco, cake and coffee afterwards before getting on with the rest of the day. It may have taken the best part of 200 runs but I’m really pleased to say that a number of these people I see every Saturday have gone from people I began to recognise, to people whose names I learnt, to people I’m now happy to call friends – and in some cases not just on Facebook! 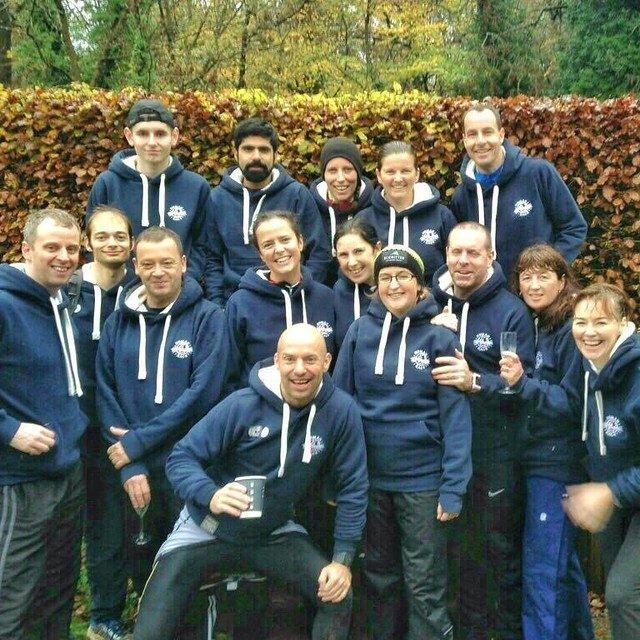 I know from reading posts on Facebook, other blogs and the like that many people look forward to Saturday morning (or parkrunday as many now call it) more than any other day of the week.  I know for me that’s certainly still the case, hopefully it will still be true when I’m back in full time employment and I need to be up early after five days in a row of early alarms and heading into an office again… just need to hear back about the job now, fingers are still crossed!