It’s been a pretty full on few weeks since I last jotted any thoughts down here. For those of you who kindly commented or contacted me to offer advice, encouragement or simply to say hello, it’s all much appreciated. Clearly my idea of a change of career isn’t completely off the wall and my CV I have been sending isn’t an absolute car crash, as I’ve managed to score three interviews so far this week. Even if they come to nothing it’s at least reassuring to know that I am beginning to get somewhere and it was also really nice to have Kim at the Mo Farah Foundation say how happy they were with the work I have been doing in the few weeks I have been there. So that’s all good but what about this inspiring a generation thing then..?

I was lucky enough to go to all three days of the Davis Cup Final over in Ghent. Those of you that are friends with me on Facebook may have seen me post one or two pictures over the weekend, sorry if I was a bit over the top at all. Now as my girlfriend is the Head of the Davis Cup I believe I am contractually obliged to say how good it was but even if I had never met Justine (and how sad would my life be if that were the case) I still would have genuinely raved about it as much as I have. From the opening ceremony which was brilliantly conceived and executed, to the amazing atmosphere generated by the awesome Belgian and British fans through to the incredible tennis witnessed on court, it would be no exaggeration to say it was the best sporting event I have ever been to. I even got a bit carried away and hung around afterwards for about an hour as Andy Murray spent all that time signing autographs and posing for selfies. 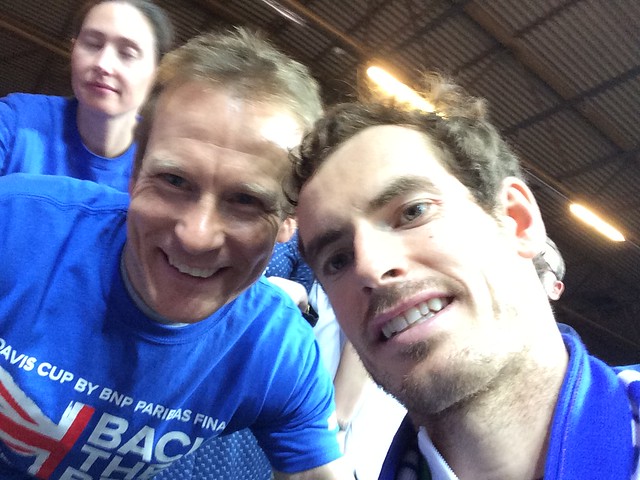 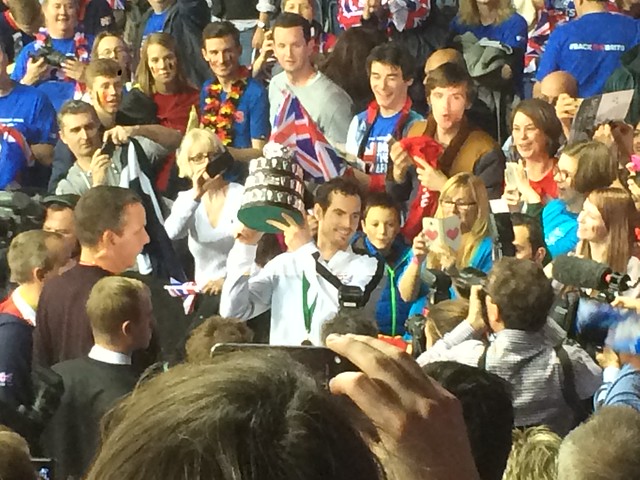 Anyway, what has this got to do with the over riding theme of my blog which is supposed to be all about me making a big career change from software marketing to working for a sports charity and helping to  inspire kids? Simply put, I believe sport can act as an inspiration to people – and especially young people –  and the more sporting role models we have for people to look up to and aspire to, the better. While winning the Davis Cup was very much a team effort, Andy Murray played three games of tennis over three days and very much had the weight and expectations of a country on his shoulders. After the trophy presentation he looked shattered, totally spent, yet he stopped to sign a few autographs as the rest of the team headed back to the locker room to begin the celebrations. The clamour for him to continue signing grew and he then proceeded to make his way round the entire court, posing for pictures and signing flags, programmes and balls for everyone who wanted. It must have taken at least an hour and I’d like to think that amongst the excitable middle aged men like myself who should really know better there were a few kids there who play a bit of tennis now and thought, ‘yeah, I want to do this, I want to be the next Andy Murray’ and went back home on Monday morning and resolved to train that bit harder because of what they’d seen on Sunday..

Just three days later I was over in a school in Dagenham volunteering for a brilliant company called SportInspired, a great charity who amongst other things, organise sporting sessions for schools to try and get kids involved in sports and activities that they otherwise might not get the chance to try out. You could almost say they are inspiring a generation. On the day I visited, the kids were trying out fencing and boxing for the first time. The first thing that hit you – after the noise, 30+ kids screaming in a small sports hall is loud – is just how much fun the kids were having. Whether it was learning how to take up ‘en garde’, to doing burpees as part of a warm up session, to learning how to throw a good right hook, the enthusiasm and excitement was infectious. The guys taking the sessions from the local fencing club and Box Up Crime were brilliant and from talking to a few of the kids afterwards, they absolutely loved it. 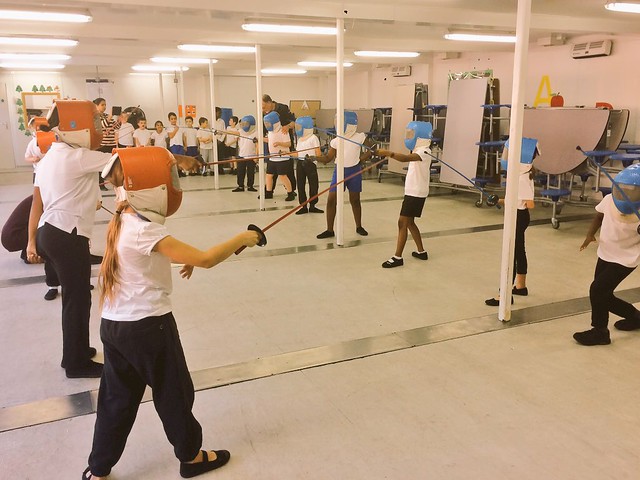 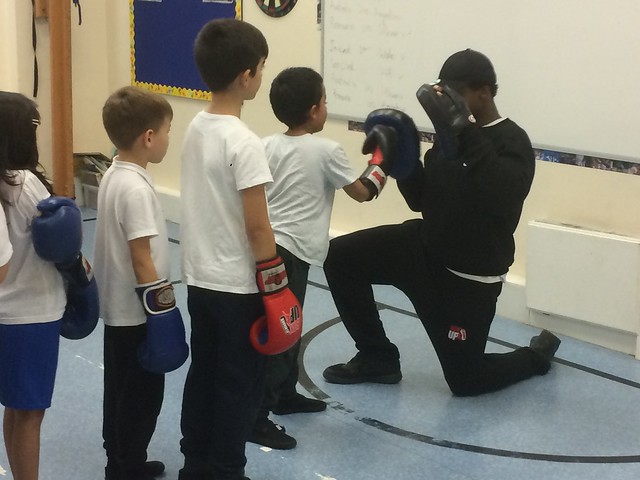 The PE teacher said that after the last session SportInspired ran, quite a few kids had gone on to join local clubs in a range of sports they had tried out at a previous festival and he was pretty sure that some of the kids today would go on to visit the fencing or boxing club to see if it was something for them. The festivals that SportInspired sound amazing – hundreds of young people trying out a range of different sports with people from the local community and businesses volunteering to help the whole day, I can’t wait to help at one. Anyway, yesterday was brilliant, it was a privilege to be there and who knows, maybe in 15 years time I’ll be hanging round a boxing ring or fencing arena trying to get a selfie with a new Olympic champion who had been inspired to take up the sport at an event back in 2015.